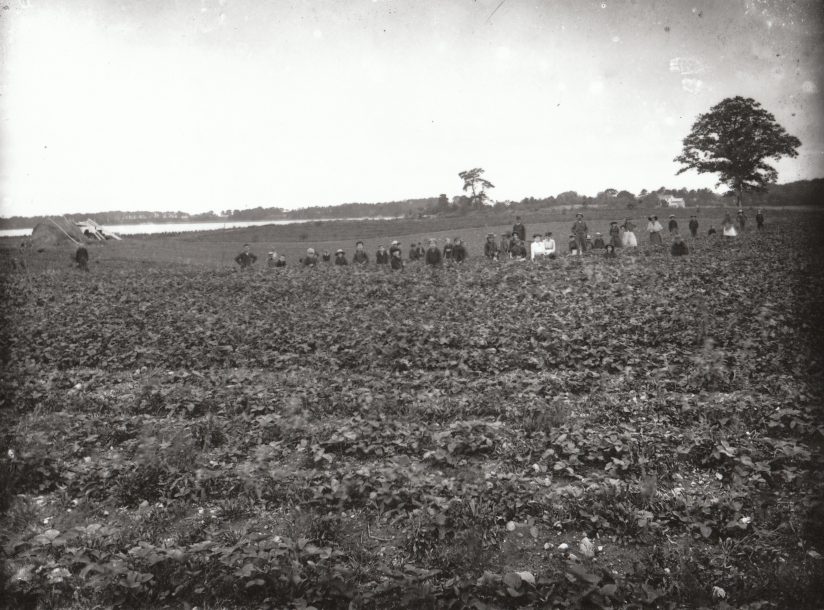 The month of June brings the ripening of strawberries which serves as a reminder that Branford was a major producer of the berry in the late 1800s until World War I. Branford grown strawberries were shipped by train to markets along the eastern seaboard especially to Boston. In a good growing year 50,000 quarts of berries were shipped from Branford. Many European immigrants were hired to pick the berries and were paid 2 cents a quart. Several generations of families picked side by side in the fields and about 1000 pickers were used in Branford during the season.

The largest farm in Branford to grow strawberries was that of the Plant family of Branford Hills in the section then known as Plantsville. About 15 carloads of berries consisting of 20,000 quarts were shipped to the Boston market from the Plant farm per year and accounted for about one half of all the berries produced in Branford. The Plant farm was also the largest producer of peaches in New England.

After World War I some of the farms were sold and help became harder find. A few farmers still grew strawberries among them were John Coolac and John Johnson of Todd’s Hill, the Cooke and Sansone families and Irving Field. The times were changing and Branford was becoming less of a farming and more of a suburban community. The Plant family orchard is now Caldors, the Nichols farm is apartments and stores, Barrons farm is now the Branford High School and Henry Averill’s field is now the Indian Neck School and Foote Park.

Perhaps while you eat your strawberry shortcake this June at the Branford Festival you might pause to reflect on Branford’s past contribution to the strawberry industry.