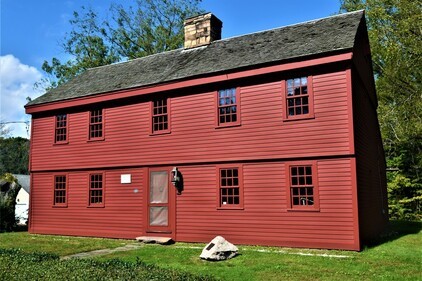 Little did Nathaniel Harrison realize when he built his saltbox house on King’s Highway for his wife and eight children that it would become one of Branford’s most important historical landmarks. The Harrison House at 124 Main Street was built in 1724 by Nathaniel Harrison 2nd (1692-1760), having received the land from his father Nathaniel 1st (1658-1727).

The house passed to Nathaniel Harrison 3rd (1735-1770) whose only child Martha married Nicodemus Baldwin of Branford.  The Baldwins lived in the Harrison House until 1800 when Martha sold the house to Joseph and Lorany (Bradley) Linsley. The house was owned for many years by the Linsley daughter Lorany and her husband Thomas Smith who served in the Civil War.

The house was purchased by J. Frederick Kelly who restored it and upon his death in 1947 bequeathed it to the Society for the Preservation of New England Antiquities (SPNEA),  further known as Historic New England. The Branford Historical Society purchased the property from Historic New England in May of 2016, and is now the proud owner of the Harrison House.